In the Wisconsin Northwoods

Another Terrific Flotilla!
July 3
Yesterday’s Annual Flotilla/Boat Parade was a huge success, with over 25 boats joining the parade.  After the parade we were treated to some great country music by Mick Howen and his band (see the photo at center of webpage), which we enjoyed from our boats just offshore.

Lake Level Still Higher than Normal
June 26
The lake level is still far above its historical high water mark, which makes the ‘virgin’ shoreline (and docks and spawning beds and fish habitat) very vulnerable to damage from large boat wakes.

Happy Summer Solstice!
June 21
The Summer Solstice -the longest day of the year- has always been dear to our hearts here in the North.  Perhaps just a coincidence that today could also be one of the hottest days as well, at 90+ degrees.  A good rain shower should be coming soon, to wash to pine pollen away.

Bird Feeder Traffic is Slowing
June 16
The traffic at the bird feeders here has slowed considerably lately, likely because of the emerging natural foods like bugs, etc.  But also the birds are busy with nesting activity, and soon we should start to see the chicks & juveniles.

Great Turnout at the Annual Meeting
May 29
We had a near-record turnout at the Annual Spring Membership Meeting of Lake Mildred & Clear Lake Association on May 28 at the Pines Event Center.  Lots of great info was had, including our guest DNR fisheries presentation.

The Air Force is Coming
May 27
For all of you aggrieved by mosquitoes, take heart – we just found our first dragonfly, newly hatched.   Hopefully that’s just the first of many more of these mosquito-eating ‘machines’.

Hungry Hungry Bears
May 18
There have been many many reports of bears invading local yards and looking for food – especially bird feeders or garbage.  And some are not easily intimidated.  Be cautious for the presence of cubs – while cute, their very protective mother is nearby.

Improving Fish Habitat on Lake Mildred and Clear Lake
May 7
Paul Evans wrote a great essay about the many factors involved in improving fish habitat here.  As Paul says: it’s more complicated than you’d think.  Check out this essay HERE.

Loons are ‘Famous’
May 5
Still cracks us up to be watching a Hollywood movie and hear the lonesome soulful sound of a loon’s wail – in a desert!  Or on a mountain!  Like us, Hollywood loves the loon’s wail – but sometimes uses it in the wrong places.  That’s Hollywood!

WELCOME TO THE ‘NEW’ LAKEMILDRED.COM

LakeMildred.com outgrew its old website tech, and with the help of the great team at Wisconsin Lakes & Lakekit.net, created an entirely new site.  And now you can call it lakemildred.com or lakemildred.org – they are one and the same.   Using the latest tech, this all-new site should be easier to use on any computer or mobile device – even cellphones.   Feel free to click around on the menu bar to get a feel for the new layout. 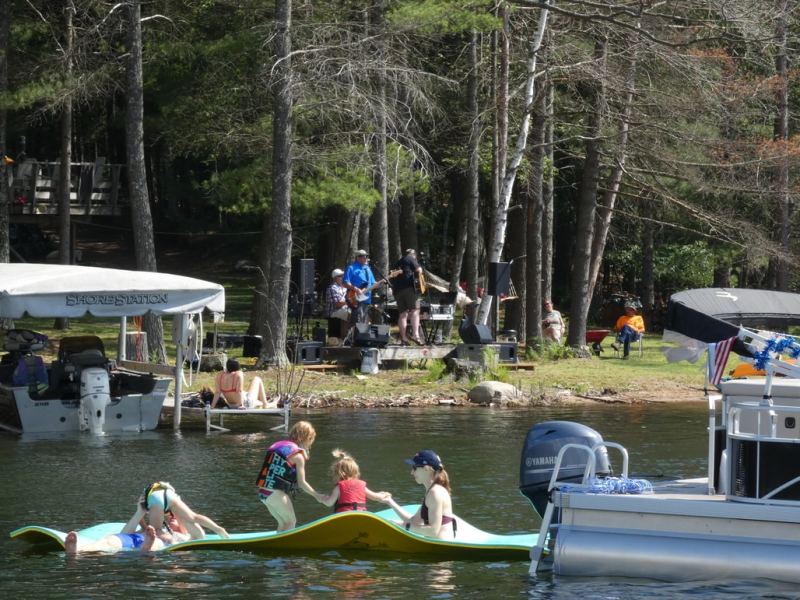 Mick Howen & His Band Play at Flotilla 2022  – As the band plays from shore, boats and swimmers enjoy the music from the water – at the conclusion of the boat parade.

Wondering About Ice-Out or Ice-Up Dates?

Wondering when the lake ice will go out?  Looking at the history of when Ice-outs and Ice-ups occur can shed light on what to expect this year.  And you can see our Ice-Out/Ice-Up history chart going back to 1977 at the Lake Info page.

“A lake is the landscape’s most beautiful and expressive feature. It is Earth’s eye; looking into which the beholder measures the depth of his own nature.”      – Walden, Henry David Thoreau

Learn About Loons at LoonProject.org 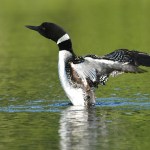 Protect Your Waterfront Investment – View this free PDF about protecting your waterfront investment, presented by UW Extension and the Wisconsin DNR.

Spring 2022 Lake Association Newsletter has been mailed to members, and is available both HERE and on the Records page.

History Lost – And Found
Apologies!  We’re sorry that in the prior iteration of this website, the History Page went missing.  But now it is back: go to the Lake Info page, then click at the History link.